The Patriots and the Seahawks will take the field for Super Bowl XLIX on February 2, and there’s no shortage of story lines to follow.

#DeflateGate looks to be the newest scandal that won’t go away.

All kinds of stats, records and bragging rights hang in the balance. Fortunes will be made and lost on the game. Fans, bettors, pundits and writers across the country have been examining the game from any and all angles (well the ones not obsessed with firmness of balls anyway) to find any details that might affect the outcome of the Super Bowl.

But for all the blustering about keys to the game, for my money Super Bowl XLIX will be most impacted by New England’s Rob Gronkowski and Seattle’s Richard Sherman, the most important non-QB players on their respective teams, or as I’ve decided to dub them alien and predator.

Richard Sherman has become the outspoken face of the “Legion of Boom,” Seattle’s celebrated defense. He’s made his career preying on errant throws and less-skilled recievers. Due to his undeniable ability to feast on ill-advised throws, Sherman has been compared to a predator time and again. In fact, the “Sherman Predator meme” gained a day in the sun following 2014’s NFC Championship win over the 49ers:

When the Predator successfully kills it’s prey, it will skin their foe and make a trophy out of the carcass. Sherman will celebrate a victory by giving impassioned speeches in post-game interviews. And of course don’t forget the various trophies he’s amassed during his career, including a Lombardi Trophy and 2014’s Best Breakthrough Athlete ESPY Award.

The fact that both have dreadlocks is another comparison between the two. 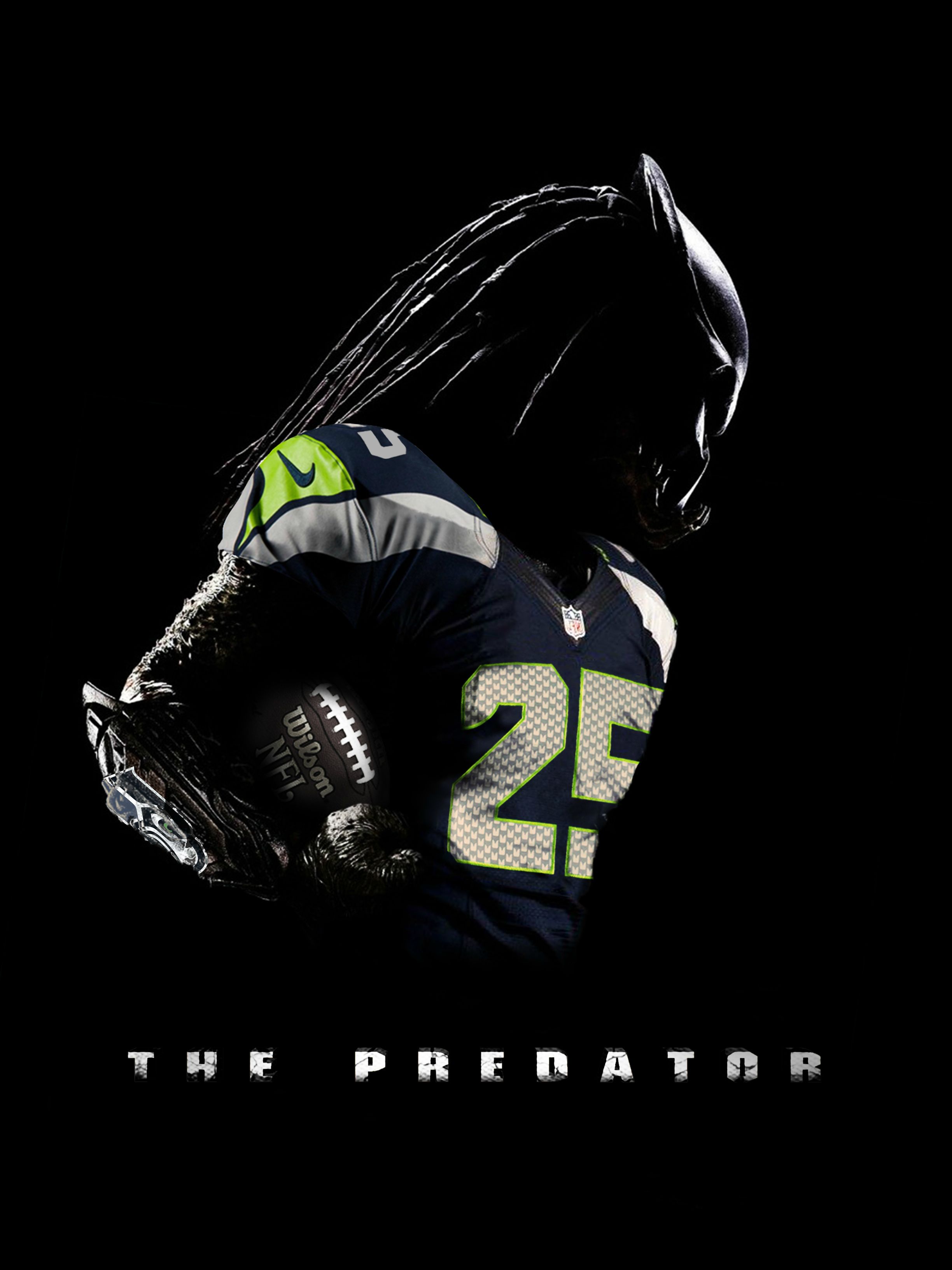 Toward the end of the original Predator film, Arnold is able to wound the Predator through a trap, and the Predator has to continue his fight with Schwarzenegger with a wound. In an eerie similarity, Sherman was wounded in last week’s NFC Championship when he sprained his left elbow in the first play of the fourth quarter, playing the rest of the game with his arm tucked into his side. Now, questions abound about what his status will be for the Super Bowl. In the film, the Predator is able to subdue Schwarzenegger by physically outfighting him. But Schwarzenegger gets the last laugh when he kills his opponent by by dropping a trap on it from above. In this case it was brain, and good luck, that allowed Schwarzenegger to walk away victorious.

There’s been no shortage of stories about Gronkowski being a freak of nature, so much so that he might not even be from this planet. With a 6′ 6″ frame and a weight of 265 lbs, Rob Gronkowski is a beast of a man; but in the NFL, that’s not terribly unusual. What makes Rob Gronkowski terribly unusual is his ability to do things like this:

Or the instant classic ‘I Threw Him Out of the Club’

But Gronkowski’s out-of-this-world prowess on the field isn’t the only similarity with the Alien of the eponymous film.

Aliens are know for spawning and living in large groups. Gronkowski himself is part of a large brood. He is the second-youngest of five brothers, all of whom play sports at a competitive level. Rob recently had the commissioned painting “Bro Power” installed at his house.

One aspect of Aliens that might be missed by the average fan is it’s sexual overtones. From the Aliens Wikipedia page: “the creature’s combination of sexually evocative physical and behavioral characteristics creates, ‘a nightmare vision of sex and death. It subdues and opens the male body to make it pregnant, and then explodes it in birth. In its adult form, the alien strikes its victims with a rigid phallic tongue that breaks through skin and bone.'”

The Alien also uses his tongue to intimidate his opponents, as does Gronkowski: By the time Super Bowl XLIX kickoff takes place on February 1, there will be more articles written about who will win the game than there were aliens in Aliens. As far as prognosticating goes, if either Gronk or Sherman have an incredible game, his team has a great chance to win.

If Gronkowski has a big game, it means Seattle’s defense wasn’t able to contain the Alien. A big game by Gronkowski would put a lot of pressure on Wilson to keep up with the Patriots offense. Wilson has enjoyed a very good career, but the defense is really the source of the Seahawks’ power.

If Sherman has a great game, it means the Pats’s air offense was stymied. At the very least that means the running game would have to carry more of the load. LeGarrette Blount has had some great games in the playoffs, but Marshawn Lynch he is not. If the competition comes down to a running game, you almost certainly have to give the edge to Seattle. At worst, a Sherman explosion means the Pats had several turnovers. And in the NFL, more often than not whoever wins the turnover battle wins the game.

In the first Alien vs Predator (spoiler alert!), the Predator does indeed kill the alien, but not before it plants an alien baby and sets the stage for the sequel, so the alien really wins. In the second, both the Alien and Predator fight to what amounts to a tie, before they are blown up by the military in a nuclear blast, killing them both.

What does that mean for Super Bowl XLIV?

This isn’t a movie, it’s the National Football League.

See you on Sunday.

Fans can save $250 on Super Bowl tickets at Ticket Liquidator with discount code ESB250!

All trademarks remain property of their respective owners. TicketLiquidator.com does not claim any right or ownership to any of the names contained in this release. These names are strictly used for descriptive purposes and do not imply an endorsement or partnership.