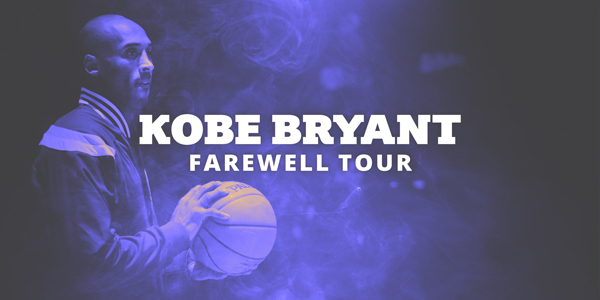 Kobe “The Black Mamba” Bryant. Is he the greatest basketball player of the post-Jordan era? Or maybe, just maybe, is he better than Jordan? Better than Russell? Than Magic? Than Kareem? Who is the “Greatest of All Time”? The jury is still out on those questions – a debate that will spark spirited discussions and heated arguments for generations to come. What is not up for discussion is Kobe Bryant’s greatness. A cold blooded killer with ice water in his veins, a fiery competitor, and a trash talker who made sure his game talked the loudest – a man who devoted his life to the game he loves. Putting Kobe Bryant anywhere outside your top-10 is blasphemous, and he ought to be in everyone’s top-5. Scorers come and go, there will be more ferocious defenders and even a few people who can make that clutch bucket. But there will never be another Kobe Bryant. Kobe was all of those things, a gifted scorer, an incredible defender and arguably the most clutch player on the planet. Let’s say your team was down by 1, with four seconds to go in the in the 4th quarter; NBA finals, game 7 – you make the shot, you win the championship, you miss, you lose. If you had the ability to pick any player, past or present to shoot that shot, who would you choose? I for one, would pick Kobe Bryant. An older generation might say Larry Bird or Michael Jordan, the younger generation might say Curry or Durant. For me, even recognizing the greatness of those aforementioned players, it would be Kobe. Kobe takes that shot for me (every single time). Whether you are a Kobe hater (and there’s a lot of you out there) or a Kobe supporter like me, you cannot deny his greatness, cannot ignore his passion for the game, and his competitive fire.

The hardest working athlete I’ve ever had the privilege of watching – Kobe, The Man who wakes up at 2 am, heads to the gym, and puts up 400 shots. Kobe, The Myth who hits the gym and makes 500 shots per day; 250 in the morning and 250 at night, after he fits in his already scheduled daily practice. Kobe, The Legend. Let’s take some time to review a few of Kobe’s career highlights, enjoy as we watch in awe, the greatness that is Kobe Bryant. Kobe’s 81-point game will not be included in this list – writing about that could be an entire article on its own, that game will forever be one of the greatest performances in sport of all time. The videos that are listed are listed in no particular order – and are included because they are either incredible plays, or embody and represent the spirit of The Black Mamba.

Kobe, the cold blooded killer, fearless with ice water in his veins. This is a really short clip that I have always enjoyed. It’s not a shot, or a buzzer beater or an insane defensive play – It is simply a representation of Kobe’s fearless, pull no punches, take no B.S. attitude.

The Black Mamba, doesn’t even move, doesn’t even blink! Matt Barnes, thinking he was going to intimidate or make The Mamba flinch tries to pump fake the ball at The Mamba, but The Mamba isn’t having any of that. THIS represents Kobe’s competitive fire, his seemingly calm exterior, the ice water in his veins; it depicts him as the stone cold killer he is.

Now, let’s see some of that clutch shooting that made Kobe the household name he is today. If you don’t shout out “KOBE!” when you shoot a piece of crumbled up paper into a garbage can are you even a basketball fan? Let’s watch Kobe shoot it himself in this clip.

Previous to this shot, Kobe made an insane floater over THREE defenders just to send the game to overtime. Kobe’s iconic fade away jumper will often be imitated, but never duplicated – Kobe has the clutch gene, he’s unflappable, the player I would want to have the ball in crunch time.

People tend to forget how incredibly athletic Kobe Bryant is/was as a basketball player. Fans love the buzzer-beaters (and don’t get me wrong, I do too) but overlook his incredible ball-handling or monstrous dunks. If you for reason doubt this, just start typing “Kobe dunks on…” into your search bar, see what comes up. Actually, I’ll save you the trouble:

Let’s see some footage now; these two dunks are some of my favorites:

First we have Kobe throwing it down on a young Dwight Howard. Kobe welcomes him into the league by dropping the hammer on him, taking off from just inside the free-throw line:

Here we have Kobe Bryant with the sick hop-step on a defender, while he puts the ball behind his back and finishes the play. But he doesn’t just finish the play, he finishes at the rim. A typical player might just have the ability to lay the ball in, maybe a finger roll, but not Kobe. Kobe throws it down with ferocity, demonstrating his insane natural ability with a reverse one handed throw down.

Another video that represents Kobe in his purest form, the essence of Kobe – CONFIDENCE. Call it cockiness, call it whatever you want, you could say Kobe plays basketball as if he’s in a perpetual “heat check”. For those confused, a “heat check” is when a player makes a few baskets in a row, then he’s feeling it, and seems to be in rhythm; so he pulls up for a jumper 4 feet behind the 3-point line with two defenders in his face just to see if “his shot is still on” – Kobe is always like that, and the major difference is that he always makes those tough shots. In this clip watch the first 3 seconds closely. Kobe whispers to a fan “watch this”, then proceeds to make the deep 3-pointer with ease. Classic Kobe.

For you stat-lovers and those of you who believe that the amount of accolades and rings decide how good a player is, I will list for you a few statistics:

Check the stats, check the awards. 5 Rings, multiple Finals MVP’s an NBA MVP, a SEVENTEEN-TIME All-Star! The scoring titles to reinforce what everyone already knows: Kobe is one of the most lethal scorers in NBA history. The All NBA Defensive teams to help people see what an incredible defender and competitor Kobe is, in my mind, he is still an underrated defensive player. For those of you who go by the stats, there they are, the stats that cement Kobe as one of the Greatest Players of All Time. Above that you can see videos that paint that same picture – Kobe Bryant, The Black Mamba, The G.O.A.T.