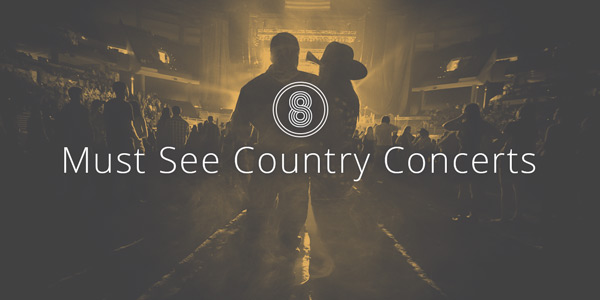 In case you didn’t already know, 2016 has some big country music concerts in the works! Country Music concerts draw in some of the biggest crowds of any live event and tickets sell fast which is why it’s never too early to make your 2016 concert plans. With so many concerts to choose from we’ve decided to put together a list of must see country concerts — so get ready to mark your calendars because you don’t want to miss what’s in store!

8. Carrie Underwood (January 30 – May 30, 2016*)
Carrie Underwood has come a long way since her American Idol days and after another No. 1 album she is ready to hit the road for her upcoming Storyteller Tour. The Storyteller Tour will begin January 30th in Jacksonville, FL featuring guests Easton Corbin and the Swon Brothers. Can’t wait til next year? You can catch Carrie Underwood in December at the Sinatra 100 in Las Vegas or the Opry at the Ryman in Nashville.

6. Dixie Chicks (May 1 – October 10, 2016*)
The country legends are back for the DCX World Tour MMXVI! The multi-Grammy Award winning Dixie Chicks will embark on a North American tour beginning May 1st at the Riverbend Music Center in Cincinnati. The brilliant singing and songwriting makes for a spectacular show. Be there when the Dixie Chicks play all your favorite hits like “Not Ready to Make Nice” and “Heartbreak Town.”

3. Johnny Reid (February 1 – April 3, 2016*)
Canadian country music fans are in luck when Johnny Reid returns to the stage. After a few years off, the Scottish country music star will embark on an exclusive Canadian comeback tour with over 35 concerts scheduled. The What Love Is All About Tour will begin February 1st in Vancouver, BC.

2. Jason Aldean (January 14 – July 29, 2016*)
The country hit-maker, Jason Aldean is back for more in 2016! After a highly successful 2015 tour, the multi-platinum selling artist will once again hit the road for his We Were Here Tour 2016. The tour will begin January 14th in Moline, IL and will feature guests Thomas Rhett and A Thousand Horses. Be there to witness one of country music’s biggest stars live in concert!

1. Garth Brooks (Current – January 30, 2016*)
Country Music’s ironman is still going strong! Garth Brooks is currently touring North America but has concerts booked through the beginning of 2016, with more shows to be announced. Garth Brooks’ high energy concerts is something every country music fan should witness! Touring alongside Trisha Yearwood, this is truly a must-see concert.