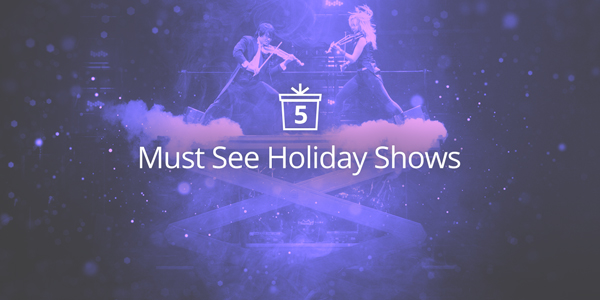 Thanksgiving has passed, the days are short, and it’s time to break out the winter jacket. Lucky for you, the holidays bring in some of the year’s biggest and best shows to keep you warm this winter!

Not sure what shows are playing this year? No need to worry, we’ve got your covered! Whether you’re looking for the perfect gift or just want to get out of the cold, here’s five of the hottest must see holiday shows.

Radio City Christmas Spectacular – The American classic puts on a one-of-a-kind experience with over 140 performers singing and dancing to famous holidays songs like “Sleigh Ride,” “Here Comes Santa Clause,” and “The Parade of Wooden Soldiers.” The musical production alone is worth the price of admission but add on the world class dancing and storytelling and you’ve got yourself a spectacle for the ages! Come find out why the Radio City Christmas Spectacular has been running annually for over 80 years. Join Santa and the Rockettes for a Christmas to remember when “Santa Flies to New York” for this beloved NYC tradition.

Trans-Siberian Orchestra (TSO) – This year’s TSO production is based on the novel “Ghosts of Christmas Eve” and fans are in for a treat. The annual TSO tour is always a hot selling concert ticket and with a new album out (Letters From the Labyrinth), this year’s TSO may be the biggest yet! More than 10 million albums sold and 20 years of experience has morphed this American progressive rock band into one of most in demand acts today. Don’t miss out out seeing one of the world’s greatest stage productions live with the group Billboard ranked as one of the “Top 25 Touring Artists of the Past Decade!” Over a million fans are expected to attend this year’s TSO tour — so get your TSO tickets well in advance.

Elf – The Musical – This is the holiday musical every “Buddy” should see! The Hollywood Christmas movie adaption, Elf, hits the Broadway stage this winter and if you enjoyed the film with Will Ferrell then you’ll love the live show! Follow Buddy on his journey to New York City as director Sam Scalamoni, choreographer Connor Gallagher, and composer Matthew Sklar take on you on a wild ride from the North Pole. In Only a few short years, Elf- The Musical has become one of the most popular Broadway shows gaining rave reviews along the way! Elf will only be touring for a limited time and you definitely don’t want to miss out.

Disney on Ice – Want to be a holiday hero? Bring the family to see Disney on Ice and they’ll be thanking you forever! Disney fans just can’t seem to get enough and this year’s ice productions are bigger than ever. 2016-17 productions include Dream Big, Follow Your Heart, Worlds of Enchantment, Dare to Dream, and Passport to Adventure! The hottest show on ice brings a Disney instant-classic to life with world renowned skaters jumping, flipping, and twirling through the air! On top of that, a montage of Disney characters are featured including Buzz Lightyear, Micky, Donald, Goofy, Snow White, and more! Don’t miss the chance to see the wonderful spectacle live in person this holiday season!

A Christmas Carol – Nothing gets you in the spirit of Christmas quite like this holiday tale! A Christmas Carol is an institution of the holidays so Get “Scrooged” with the Ghosts of Christmas Past, Present, and Future this winter! It doesn’t matter how many times you’ve heard the story, the top notch production delivers every time. This timeless classic is for all ages so get the family together and make it a Christmas to remember!